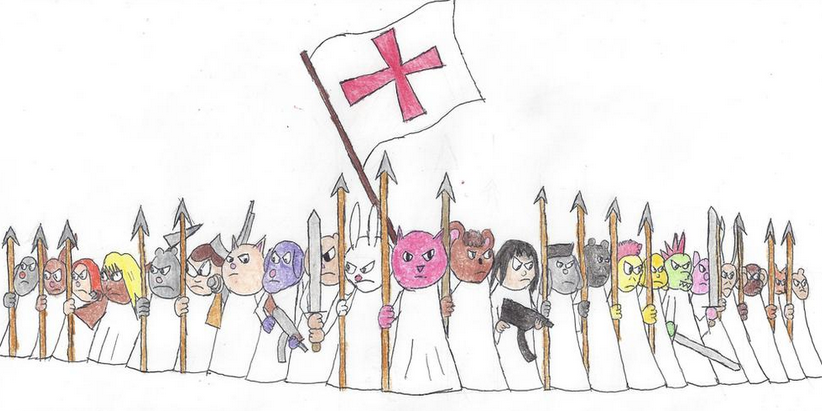 ‘”Education” continues its slide into indoctrination and brainwashing. The Cultural Marxist’s “long march through the institutions” is now substantially complete.’ (@JWSpry)

‘There’s a disturbing whiff of totalitarianism, in that this secular religion permits no dissent’ (Karl du Fresne, Dominion Post, January 23, 2020)

The New Zealand government has announced a new Climate Change Curriculum (available here) for children from 10 and above.  It is a callous, exploitative project whose undisguised aim is to frighten children to death (perhaps literally) in order to fulfil the government/UN climate agenda.

Let us be quite clear – the climate change curriculum has nothing to with science or education but is unashamedly evangelical.  The IPCC reports are Holy Writ, and to question any detail is heresy.  There is instruction on how to resist temptation from the devil, in the form of sceptics (heretics).   Donald Trump, the villain who pulled the United States out of the Kyoto Agreement, is of course the Devil Incarnate.  There are fast days with abstinence from certain foods. Greta Thunberg leads the Children’s Crusade.  If the children fail, there will be hell on earth, and they will live with the guilt forever – moral blackmail, guilt and blame play a prominent role in the climate cult.

There is no attempt to apply academic rigour at any point or to inspire critical thinking – the aim is to suppress critical thinking.  Children are brainwashed, cowed or bullied into becoming climate activists.  They are given no space to disagree with the facts as presented, to fail to respond emotionally as demanded, to refuse to take action as required. Such manipulation is child abuse.

The ‘Science’ (Section A)

The fundamental creed is, of course, that an increase in anthropogenic greenhouse gases, principally CO2, is causing the world to warm up, with various spin-off effects like scarily rising sea levels, droughts, hurricanes etc.

The science presented is at best selective.  It does not show the breakdown of gases in the atmosphere.  There is no attempt to put climate change into context, even by providing a graph of geological history.  Everything is taught as bald fact, with no room for debate, even where the claims are hotly disputed by reputable scientists around the world.  Instead the children are taught to swallow and regurgitate the mendacious mantra that ‘97% of climate experts agree’.

The IPCC is referred to repeatedly as an absolute authority, despite the heavy criticism that has been levelled at the organisation over the years, with number of contributors complaining that the findings of scientists are reversed by the final editors .  New Zealander Dr Vincent Gray, who contributed to all the early IPCC reports, described the IPCC in 2007 as too blinkered and corrupt to save (see also here and here ).

An analysis by Dr Jock Allison of flaws in the science presented, focusing on the so-called myth busters in Session 7, is included below as an Appendix.

How does it make you feel?

One of the strangest aspects of a supposedly scientific subject, where one would expect the application of  some objectivity, is the emphasis on and encouragement of emotional response.  This is introduced as early as lesson two  with ‘The Feelings Splash: How does this make us feel’.  The remaining lessons of Section A include segments entitled ‘Feelings Thermometer. Can we measure our feelings?’; ‘Understanding our feelings about Climate Change’; ‘Introducing “Psychological adaptation”: Wellbeing action – what can I do?” – all leading up to Lesson 7: ‘Empathy/Outrage + Action = ACTIVISM’.  (One doesn’t like to think of how a child who said, ‘I’m fine with it’ would be viewed.)

Emotional response is such an essential part of the programme that there is a separate 15 page teacher resource dedicated to the subject.  Having callously pressured and enticed children into experiencing overwhelming emotions by telling them what is in effect a pack of lies, the education authority kindly offers advice to teachers and in turn parents on how to deal with traumatised children:

‘It is normal for children and adults to feel worried, frustrated, angry and sad when learning about the issues around climate change. Parents and whanāu can help when they acknowledge and accept the range of emotional impacts that awareness of climate change brings.

‘Parents and whanāu can watch out for:
• Worsening anxiety or behaviors over time
• Withdrawal or avoidance
• Excessive reassurance seeking or limit testing
• Changes in sleep, appetite and weight
• Somatic symptoms such as tummy aches and headaches
• Anxiety or behaviors that are interfering with functioning or causing distress
• Any other change in your child that causes distress or interferes with their functioning’

There follows a long list of professional agencies that can advice parents or treat traumatised children.  And finally, parents are warned:

It goes without saying that, if the campaign has its intended result and children are driven to suicide by this programme, blame will be attributed to climate change, not to the wickedness of those who devised this programme.

Activism (Sections B and C)

The purpose of the curriculum is not to educate: it is to terrify the children, then prime them for activism.  The argument for an urgent need for activism is as follows:

Section B introduces the concepts of personal responsibility and activism:

Session 6: ‘Living with Climate Change: What can I do?’

This session starts by recapping the essentials of the situation as has been taught to the children, with a graph showing sensational, totally unrealistic scenarios by 2080-2100 if little or no action is taken to reduce emissions.

None of these predictions are any more likely to come to fruition than any of the past sensationalist predictions on the subject – see Jock Allison on failed predictions, below, Point 22.

Having been reminded of looming Armageddon, the children are now set for the next stage.  They can live their religion, by making changes to their own lives, on the basis of the science as they have been taught it.  They can do their bit to reduce emissions by using less electricity, shopping locally, driving less, planting trees, etc.

A most concerning element is the strong pressure on children to limit their meat and dairy intake, with no discussion of health implications, nor any relevant resources. Starting with meatless Mondays is suggested – it is very clear that it will be virtually impossible for a children to opt out if a school makes this policy. The programme is intended for children as young as 10 – ‘A dietary warning for people with developing bodies would be a prudent addition as well if teachers want to avoid lawsuits’ (Robin Grieve).

Greta Thunberg is introduced at this stage as an inspiration, presaging what is to come.

Go out into the world and spread the word (Session 7)

Essential tools: children are first reminded of the fallacious mantras that ‘most scientists’ agree (argumentum ad verecundiam or appeal to authority) and that most of the population agrees (argumentum ad populum).

The discussion on activism covers climate activists that the children may have hear of, such as Greta Thunberg, Schools Strike4Climate, and David Attenborough, who has himself been blamed for the epidemic of eco-anxiety among young people.

How to deal with sceptics

While the climate cult insists that there is no significant opposition to its teachings, care has been taken to include in the curriculum a sizable section on dealing with heretics who question the IPCC gospels.

Children are given instruction to prepare them for dealing with hypothetical situations with those who are yet to be convinced, or ‘flat out deny the existence of climate change’ (nobody denies climate change, but no matter). Children are expected to rote-learn a set of dictums to be used to confront such situations and make conversions or silence unbelievers – role plays are set up to help them memorise the answers.

The suggested situations are often straw men, and the answers are either seriously disputed or out and out lies (one can only guess at the conflict that will arise between a child armed with these mantras and an educated parent). For a detailed analysis of the ‘myths’ and their supposed refutations, see Jock Allison, below.

Section C, ‘Time For Climate Action’ consciously sets out to turn children into activists for the climate cult.

Children are obliged to commit as groups to ‘actions’. Suggested actions range from turning off lights to planning a campaign or a website. Children are encouraged to target their campaigns at everyone from parents to cabinet ministers.

Ironically, there is also a section on children’s basic rights, including those relating to wellbeing and education. Of course, as is the fashion, there is a suggestion of greater entitlement, also that adults are not taking action because they are selfish and uncaring of children and future generations (not because they have more sense).

The resource does not actually suggest civil disobedience, but it does feature prominently Greta Thunberg, who is closely aligned with the militant Extinction Rebellion.